Murder in the Merchant City

Annette Somerville, a young single mother, earns her living as a high-class prostitute in a Glasgow sauna and massage parlour, scrupulously keeping her respectable home life completely separate from her professional activities.  Then there is a series of murders in the city, seemingly unconnected, until Annette discovers a common element that has so far escaped the notice of the police.

What should Annette do?  If she takes her information to the police, she could lose her job as a result.  But her new boyfriend could be the murderer’s next victim.

Can Annette continue to keep her two lives separate, or are they destined to violently clash?

This novel is set, mainly in Glasgow but also partly in Paisley, in the mid 1990s, which is the time when the book was written.  I wrote it immediately after The Cyber Puppets and before I began work on Close Quarters.  (The latter book was in fact begun in the late 1990s, but I got stuck with it a little more than halfway through, and only managed to complete it as part of my bucket list after I retired a few years ago.)

I had been pleased with The Cyber Puppets and was disappointed by its initial rejection by publishers.  Since I didn’t know how to write a better science fiction novel, I decided to try something different.  My genre interests had for some time been moving away from science fiction in the direction of crime, and The Canongate Strangler had been regarded by readers and critics as a crime thriller rather than the SF book I intended to write.  And although sales of that book had been curtailed by the premature demise of its publishers, it had received a number of very good reviews.  I made two attempts to place my new crime novel, immediately after it was written, and again after I retired, but without success.

This experience was a major reason why I took matters into my own hands by self-publishing Close Quarters : no longer as young as I used to be, and having taken so long to write that book, I was determined to live long enough to see it in print.  This decision proved to be a wise one: as well as selling well and attracting favourable reviews, Close Quarters got me noticed.  I was asked to speak at the Aye Write! book festival in March 2018, and was also contacted by an editor from the Edinburgh publishers Birlinn (Polygon) who had read Close Quarters and wanted to see more of my work.  They liked my unpublished crime novel, offered me a contract, and it was published by them in February 2019.

The original working title for the book was The Wages of Sin, a Biblical reference from Romans 6.23: “For the wages of sin is death.”  This is appropriate for the theme of the book, but it has been used as a book title several times before.  For this reason, I was never totally happy with it, and Birlinn, who shared that view, suggested a change. A number of possible new titles were discussed, and Murder in the Merchant City was finally chosen after consulting the crime buyers in Waterstones, Sauchiehall Street.

A number of chapters are told from the murderer’s point of view, without, however, revealing the killer’s identity, or even making it clear whether he or she is male or female.  It quickly becomes apparent from the opening chapter that he/she is working through a list of people who, according to his/her (probably warped) moral code, deserve to die.  A number of suspects are presented to the reader, all of whom could conceivably be motivated in such a way.

The book is in a very similar style to Close Quarters. in that both books combine a murder mystery with a strong element of humour.  In particular, Murder in the Merchant City exploits the potential for earthy humour inherent in the book’s subject matter (a warning to the faint hearted!)  However, the murder mystery always remains predominant whereas, when I began to write Close Quarters, it quickly became apparent that what I was writing was really a satirical comedy with a subsidiary crime theme.  The two books have other common elements: as the title suggests, Murder in the Merchant City is partly set in the Merchant City of Glasgow (where the massage parlour is located) but also in Paisley, where Annette lives with her children, and another major location is Glasgow’s west end, where Close Quarters is entirely set.  The fictitious west end pub The Centurion looms large in both books, and Annette’s boyfriend Jack, who works as a barman there and appears briefly in the opening chapter of Close Quarters, is now elevated to the status of major character. 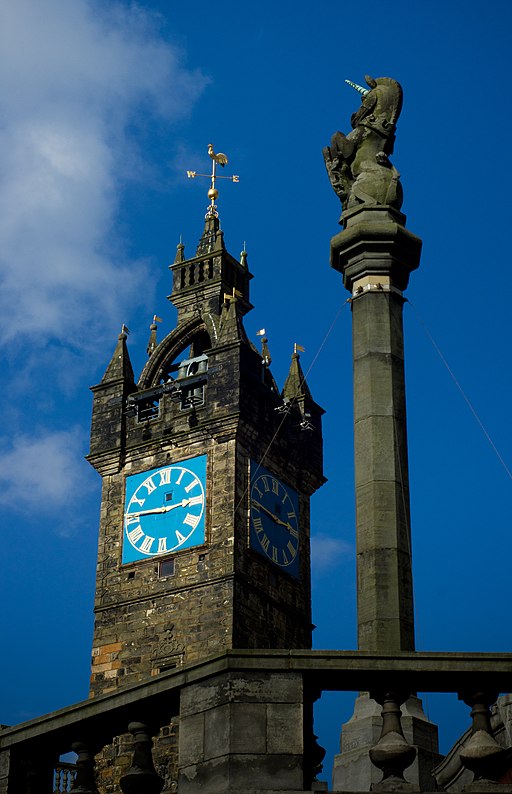 As both books occupy a similar time frame, this also allows me to use the same two detectives, DCI Matt MacDermott and DS Madigan, as the main investigating officers in both books.

The Merchant City in Glasgow is situated near Glasgow Cross, Glasgow’s real city centre.  Formerly very-run down, the area has been undergoing a process of complete refurbishment over the last few decades, with many of its fine buildings now stonecleaned and restored to their former glory.  This process is now substantially complete, but in the 1990s, when my book is set, it was at an intermediate stage: round the corner from the up-market bars and restaurants clustered around the City Hall, there were dark back streets, where a sleazy massage parlour could be discreetly located, with gap sites, where a victim could easily be dragged and violently murdered, as in chapter 1.

It is very common for books about serial killers to feature prostitutes, but they nearly always function as the killer’s victims, and even in books where working girls don’t appear, the serial killer’s victims are more often female than male.  I thought it might redress the balance a little to write a book where all of the victims are male, and the prostitutes are not relegated to the role of serial killer fodder.  Also, unlike many whodunnits, the murders are not being investigated by a private detective, nor is the book a police procedural, and the police only play a supporting role, late on in the narrative.

“If you are looking to settle down with a gripping whodunnit — and a good measure of comedy — the latest crime novel from Angus McAllister … is worth looking up … The cleverly crafted read … keeps up the suspense splendidly.” Scottish Field. Read the full review HERE

“‘Murder in the Merchant City’ by Angus McAllister is the kind of book that starts by raising the hairs on the back of your neck and leaves them raised long after you have turned the last page … a gritty read … a fascinating book … If you like a book you can’t put down because it draws you in, you won’t be disappointed by ‘Murder in the Merchant City.'” Undiscovered Scotland. Read the full review HERE.

“[The] author provides a well drawn cast of characters and moves the plot on apace until the denouement when the killer’s identity is revealed.” Journal of the Law Society of Scotland. Read the full review HERE.